A Little Life by Hanya Yanagihara is a story about four boys who meet each other at college. Sounds like a story you may have read before. It's not. And at the same time it is. It's just written so much better. This book really made me love the characters. They are diverse and deep, and I felt everything they felt. I don't know what excactly made this story so much better than a number of books I've read lately, but this story just crept under my skin. Maybe because the style was sparse and made the reader fill in the blanks. Maybe because the characters were described in a realistic way and their struggles and way of supporting each other felt honest in some way. I don't know, but I know I haven't read a story touching me in this way for some time. I can't put it away, and I have to admit I still think about the characters even though I finished the book last week.

The book starts with four boys at college, Willem, Jude, JB and Malcolm. As the story goes on, Jude becomes the main focus. His friendships, his thoughts about life and expectations of life, his relation to other people, his lovelife, his background and the other characters story is told to put a light on his story. And this is not a negative thing. I've read some think the story is slaying people. I don't know about that. But it will definitely stay on my mind for a long time. Even though the book is about 800 pages, read it! It's well worth spending your time reading this story. 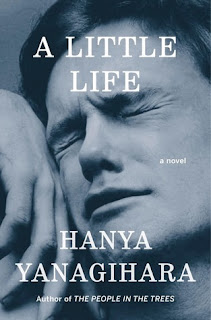