Salvadoreña starts out quite brutal, with Ana surviving an attack in her hometown in El Salvador because her mother hides her. She later escapes with Sister Josepha to USA and starts as a nanny for a rich family, Trellis and here the real story starts. I have to say I'm already going to break my promise about no spoilers, so if you haven't read the book and want to read it, DON'T READ FURTHER. 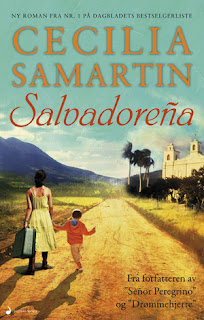 The totally innocent Ana and her admiring Mr. Trellis or Adam, is from the start quite transparent. The reader has a pretty good idea where this relationships goes right from the start. It just takes so damn long before that happens, and it really doesn't get to the point where the relationship is a story. The story is really how Ana can stay with this family as a nanna for so many years. We don't get any other picture of Ana than her being a nanna who's fallen in love with the father and love the kids. The character of Ana, which starts out quite promising, turns into a 2 dimensional and flat characther. We only see the nanna and her naive way of looking a life. I don't really believe it, how to stay out of everything that happens in the world for so many years, and only stay in tune of the family? I get that she's in love, but it just isn't that believable to me! I think this book started out promising, but the ending didn't keep Ana alive and trustworthy. To me it was the worst book by Cecilia Samartin so far, since I haven't read them all, and I'm not sure I'm going to either.
Lagt inn av amylin kl. 04:04